The B2C retail market in India is set for an e-commerce boom that could be sustained until 2019, a leading e-commerce consultancy – Chitrangana is predicting.

Chitrangana says a study of more than 250 online stores and 14 product categories revealed the e-commerce market in India is starting to buck the trend and shift away from a depressed economy. Its findings suggest 2016, especially from September onwards, will be the year of the small to medium-sized business. The survey’s findings point to a trend of natural growth for small scale projects, while large scale projects are likely to experience more decline 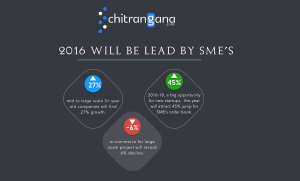 As major parts of India start to benefit from vastly improved internet speeds, Chitrangana says specialist small to medium-sized portals can expect to attract more than 45 per cent growth. It predicts that some medium-sized portals will go on to take top positions in the B2C retail industry, with growth set to continue for at least 18 months and possibly until 2019. Mid to large scale companies, which have been established for longer than three years, could see growth of up to 27 per cent while large scale projects could suffer declines of six per cent.

The predictions come at a time when India’s e-commerce industry has suffered a prolonged and marked decline in sales, a knock-on effect of uncertainty in global markets.

“The e-commerce market will begin a complete rebound from September 2016 and will experience continued huge growth for the next 18 to 24 months and possibly until 2019,” said Nitin Lodha, e-commerce consultant at Chitrangana.